Thank you for having considered this script to enhance the quality of your products. Please read the following instructions carefully, especially the ones explaining which permissions to apply to the scripts for the next owner. Failure to complete this task INVALIDATES the license governing your use of this set of scripts.

CHANGE PERMISSIONS FOR NEXT OWNER

Check the following section on this page, knowing that each [Black Tulip] ASSET refers to the scripts contained in the package as well as the supplied mesh boxes and pose. The textures shouldn't be distributed.

IMPORTANT: If you include any no copy assets in your package box, the script will not attempt to send them, and so they will remain inside the box. The script will warn the user about this, per no-copy item that it founds. Since you're using an unpacker script, you should be always working with COPY assets for next owner.


ABOUT THE SUPPLIED MESH ITEMS, TEXTURES, AND POSE

In the event that you don't have yet any unpacking box to deliver to your customers, and/or a pose for wearable ones, you can use the included ones.


If you've never used/textured mesh objects, you may want to check out the following documentation posts:


IMPORTANT: The space reserved for your product vendor picture is expecting an 1:1 aspect ratio texture. Product ads having a different aspect ratio may show distorted.


GIVE FOLDER ON TOUCH - BASIC

If you simply want a script that will deliver contents in a folder to the owner of the object, use the [Black Tulip] Unpacker - Give items on touch in folder BASIC script included in the package. The unpacker script itself isn't delivered in the folder.


GIVE FOLDER ON TOUCH

We can decide the text by writing it in the description of the prim with the unpacker script (and the assets to be delivered in a folder) something like this:

Notice the # character: it's separating the two fields that the script needs:

Try keeping your hover text concise: The description field of a prim only allows for a maximum of 127 characters.


GIVE FOLDER ON TOUCH - WEAR AND ANIMATE - BASIC

The [Black Tulip] Unpacker - Play Anim & Give items on touch BASIC script is meant for attached unpacking boxes that will play a pose/animation while attached. Neither the script nor the configured animation/pose will be sent in the folder delivered to our customer.

In order to achieve this, we need to type one command in the unpacking box description field. Before seeing what exactly, let's talk about the other feature of this script:

When setting the unpacking box to be attached, likely we've changed its rotation, so it fits with the pose. But our customers could rez the box anyway. This would leave the box rezzed in a strange rotation, like the picture shows: 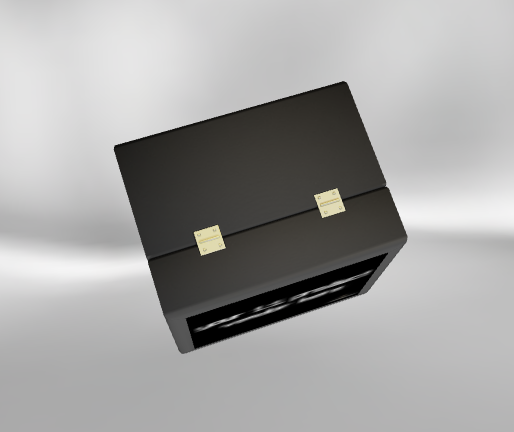 If you would like that the box is rezzed with a correct rotation: 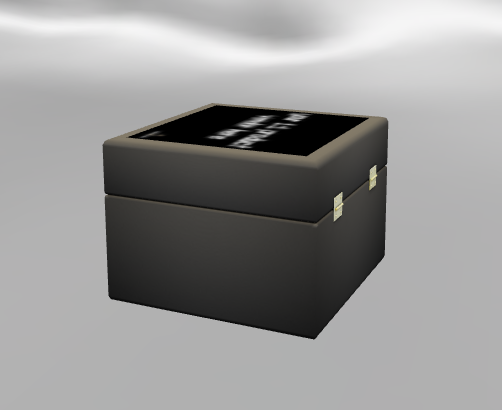 you have to supply a certain parameter also in the unpacking box description field. Let's see that now, together with how to indicate which is the animation to use as "hold" pose (Remember: This pose won't be a part of the contents of the unpacked folder.)

We can write the description of the item as follows:

As we can see, again the # character is separating fields, so in this case we have:

The first one is pretty obvious: after the anim= part, we write the name of the animation included to pose when wearing the unpacking box. Then after the rot= part, we have three numbers between < and > and separated by commas. How do we know which numbers?

We know which numbers by editing our object, and taking note of the numbers showing under the Rotation edit boxes: 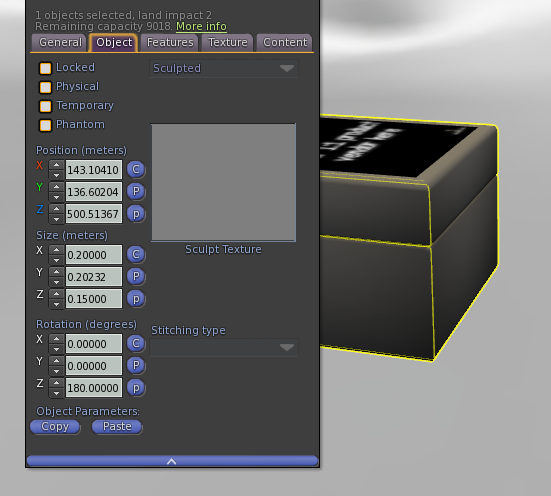 We must type them in the same XYZ order they show in the Edit window, this way:


GIVE FOLDER ON TOUCH - WEAR AND ANIMATE

The [Black Tulip] Unpacker - Play Anim & Give items on touch script gives the same functionality than the script explained above, plus the rdy and done parameters explained for the [Black Tulip] Unpacker - Give items on touch in folder script, to show hover text. Try keeping the description brief: the description field of a prim only allows for a maximum of 127 characters.


GIVE FOLDER ON TOUCH - HUD VERSION

Creating a HUD version is not so different than creating a regular unpacking box. For starters, if you've never created a HUD and don't know how to go about it, check this tutorial about creating HUDs in SL.

There's a sample HUD supplied, no transfer, to show how you could create your own: [Black Tulip] Test HUD to Inspect - Add/Wear. Knowledge about working with linked sets and what a child prim is, is assumed here. The basic idea is, you will create different prims for the different buttons you want to include:

Q: The hover text showing isn't the one I've specified.

A: Make sure that you're using the DESCRIPTION field of the prim, not the name field.

Q: I change descriptions on the HUD, but the scripts don't read them.

A: Make sure that you're changing the description field of those prims when the HUD is rezzed inworld, not attached to your avatar.