Although one would never require the 256 prims a linkset may have, to spin, if we reach this (very) extreme value, we may still add safely up to 50 songs. But normally, we will not need to use more than 20 prims spinning, so in this case, we may add safely up to 100 songs. The rule is simple: the more prims spinning, the less available memory for songs, and the reverse.


SET UP: WHAT SCRIPT TO USE?

Normal use - We want the menu to show when the object is clicked:
[Black Tulip] My Music Box - Basic Edition

The menu should show up after clicking a button from another script, like MLP, AVSitter:
[Black Tulip] My Music Box - Basic Edition [MODULE]

Rez the sample [Black Tulip] My Music Box - Sample Object from your box. It will load the configuration and output owner-say messages like the following (memory report for yours may vary):


Once we read the Read configuration: Done, we may proceed to click the object in order to bring up a menu.

So, click it. As soon as you click it, you have a menu showing with the following options:


Using this is very simple. Clicking Stop/Play, the current song will start/stop and IF there are spinning parts defined (as the documentation explains below), the spinning parts will move when the song is playing, and stop once the song finishes.

By clicking Prev Song we change the current song to be played upon click Stop/Play to the previous one in the list (and if there was a song playing, it will stop to let this previous one begin.)

Next Song has the same effect but to change to the next song on the list.

*RESET* will ask us for confirmation to reset the script. Only the owner of the object is able to perform this operation.

By clicking Pick Song we get to a secondary menu that will show a list of songs and some information about each song, and buttons that are simply numbers to let us choose one song from the list.

By clicking Volume we get the following secondary menu to change the volume of the sounds played:


Then finally by clicking Access in the main menu we get the following menu, which allows us to change who will be able to access to the menu and thus pick a song, play/stop them and change the volume:


How do we set up our furniture/items to make this work? We'll see it by inspecting the sample object in detail.

Right click the object to edit, then click the "Content" tab. When we do this, we're inspecting the contents of the ROOT PRIM. You should see:


What does this mean? That the script and sound clips, have to be dropped into the ROOT PRIM. This is the default when we simply right click an object, then select "Edit" from the menu.

What does this description mean? That's what we cover in the next section.

As you can check in the sample [Black Tulip] My Music Box - Sample Object object, this script allows you to ALSO rotate, by spinning, all the child prims you wish to rotate (until you hit the script's memory limit - don't worry, this won't happen with five/ten spinning prims). You could also make the root prim to rotate. Perhaps this is not what you would like anyway, but feel free to make a copy of your object and try this if you're curious about :-) (basically, it will make the whole object to spin around the root)

Rez the [Black Tulip] My Music Box - Sample Object sample object to follow this explanation. Pay special attention to the sections of the diagram that are highlighted. 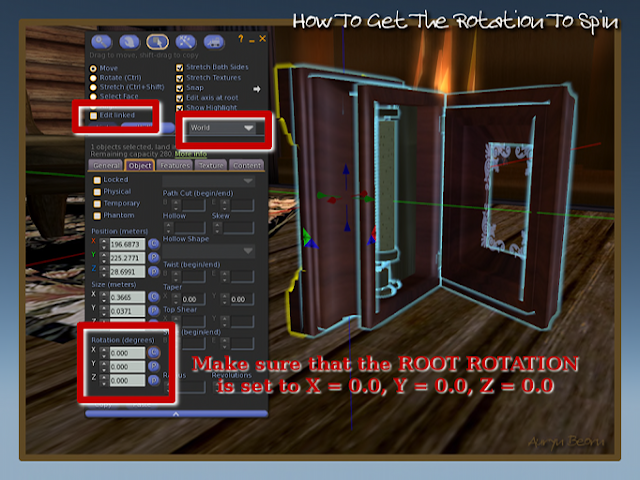 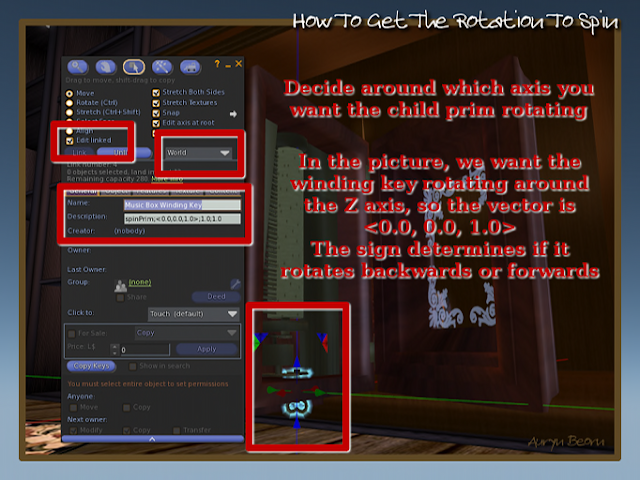 The configuration notecard is named [Black Tulip] My Music Box - Songs Config and needs to be written to provide all the data we want to:


(No other mode than whisper is allowed to prevent spamming avatars around that, most likely, won't be interested in knowing about songs being played.)

This data needs to be written in a specific way, so let's examine the [Black Tulip] Songs Config notecard.

The lines beginning by:

are comments in the notecard.

So it is OKAY if you leave them for your own reference. The comments in the notecard from your package explain all the parameters: You may want to leave those comments.

The sample notecard (not the one in the sample object) shows as:


After all the comment lines, we find the following:

This means that the script will NOT say anything when a song is played. If we wish to have the script whispering which song is going to be played once selected, we would write instead:

And then the lines that would define the songs. We should write ONE line with the following format PER SONG:

BaseName
This is the base name all the samples for a same song share. This will be clear with an example.

Let's suppose we have a song composed of five samples, named:

By writing the following line in the configuration notecard:

we can see that the first part, BaseName, says:

The script will look for all the samples in your object with name beginning by Little_Black_Rain_Cloud- and will find all the samples mentioned above, so internally, it will know that the five samples above are all part of the same song.

IMPORTANT: All spaces around the specified name in the notecard will be DISCARDED. This has consequences. If your samples are, for example:

and you specify in the notecard:

this would make the script to look for sample names like:

Rename your samples accordingly before running into this issue. Usually, all songs you purchase will have names that won't be a problem in this regard.

TitleMenu
The title we want appearing in the menu to select song.
Max: 35 characters - Longer titles will be cut to fit this

Continuing with the sample line said above:

as value for TitleMenu, so this will be shown in the menu as the title for that song.

SampleDuration
Sample duration, in seconds, for the samples of that specific song.
A default value of 9.5 will be provided if the value is not in the range [0.1, 9.95] (10.0 won't be accepted - for your safety)

In the sample line we're using to explain this:

we are saying that all the samples that are part of this song have a duration of 9.5 seconds. Since this value is in the allowed range for the script (greater or equal than 0.1 AND less or equal than 9.95), it will be accepted as the sample duration - for that one song.


WHERE DO I PURCHASE SONGS?

In order to have this item working, you will need, of course, to have songs to work with!

You can always check the Second Life Marketplace for songs. I sell some public domain, full permissions songs that you may use in items you create, at my main store.

But then, you can create yourself the samples you need and upload them. I explain all the procedure in the "Music!" book, which you can purchase in Marketplace or inworld.

This might be, perhaps, the best choice: that you look for public domain sources and you create your own samples. Be careful and do not use songs that have copyright!


If you run into any problem with this script, please give a complete description of your issue in the following online form.